A NEWSPAPER BY ANY OTHER NAME ... EASINGWOLD HAS A LONG HISTORY OF LOCAL NEWSPAPERS. 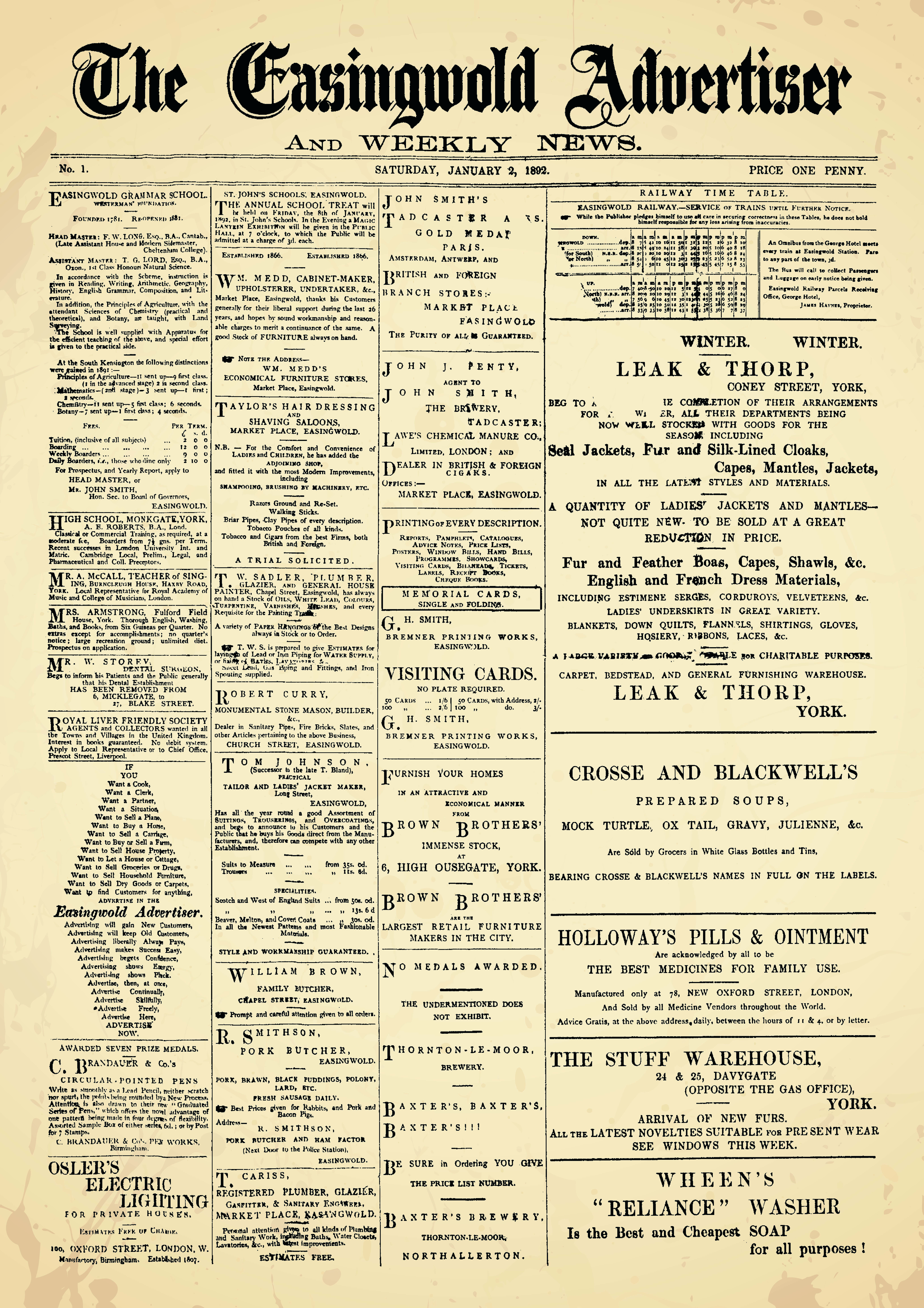 Unfortunately, though extremely talented, he was no businessman and, to help him out of his difficulties, John and Joseph Smith of Easingwold bought the newspaper in 1862, renaming it ‘The Easingwold Times’.

Shortly afterwards, Leonard Smith and his brother, the first George Smith (1844-1898), bought it from them along with associated printing equipment. George managed to combine this interest with his other responsibilities as postmaster, ropemaker, and the innkeeper of the Fleece Inn on Long Street.

‘The Easingwold Times’ was wound up, with L & G H Smith concentrating purely on print. The print works, in 1867, was called L & G H Smith, Printers. In 1870, George transferred the Post Office to Easingwold Market Place - where the now closed HSBC Bank stood (then the Yorkshire Bank). From this site he also sold wine, spirits, and pianos.

This extraordinarily enterprising man also established a printing works in the cottages behind - through the ginnell in the corner, known as the ‘Post Office Slip’. The works went under the name of the Bremmer Printing Works - named after the massive gas-powered printing presses. George’s son, Reginald Ernest Smith, published the first true ‘Advertiser’ in January 1892 under its full title of ‘The Easingwold Advertiser and Weekly News’ serving Easingwold and it’s wider community. The format has hardly changed since - the main difference being that national news is no longer featured. In the 1920s, Reginald’s son, George Smith, took over.

The present owner is his son - David Smith. During David’s time at the helm, we have seen the transition from letterpress and hot metal setting through to offset lithography to digital print and computerised typesetting. Now we use the latest desk top publishing software. The paper has gone from traditional black and white to full colour printing. The next generation of the Smiths have taken over the running of The Easingwold Advertiser & Weekly News and look forward to producing a newspaper with a traditional feel which is also fit for the 21st Century. The paper is currently sold throughout Easingwold and local villages, from Ampleforth in the north to Shipton by Beningbrough in the south to Sheriff Hutton in the east to Helperby in the west.